Start of StatCounter Code for Weebly -->
​Documents proving cause of my PTSD, and crystal clearly documents four years and one month of exemplary service in the United States Marine Corps as a Helicopter Crew Chief. Then monumentally documented combat related severe brain damage caused amnesia, causing my hands and feet to bleed almost constantly and severely for 20 years.

Official government documentation also proves beyond any reasonable doubt that over 100 combat medals are missing on my military DD - 214 discharge forms. This represents combat events that required massive amounts of adrenaline and cortisol, resulting in universally proven brain damage.

Please remember these facts, helicopter crews had the most dangerous job in Vietnam, average life expectancy was three weeks. Deaths of my friends were, recorded in HMM- 165, HMM-164 and HMM-262 that I served with, 4 years and one month as a CH Helicopter Crew Chief.

It is totally undeniable by any rational mind, to deny that I was discharged from the United States Marine Corps for a totally disabling post traumatic stress disorder, with no lawful compliance.

​The documents below establishes that I was Honorably discharged as a sergeant with no disciplinary actions of record. Which clearly establishes my baseline behavior, before becoming a war related adrenaline addict with excessive cortisol caused brain damage. No previous history of any dermatology problems. 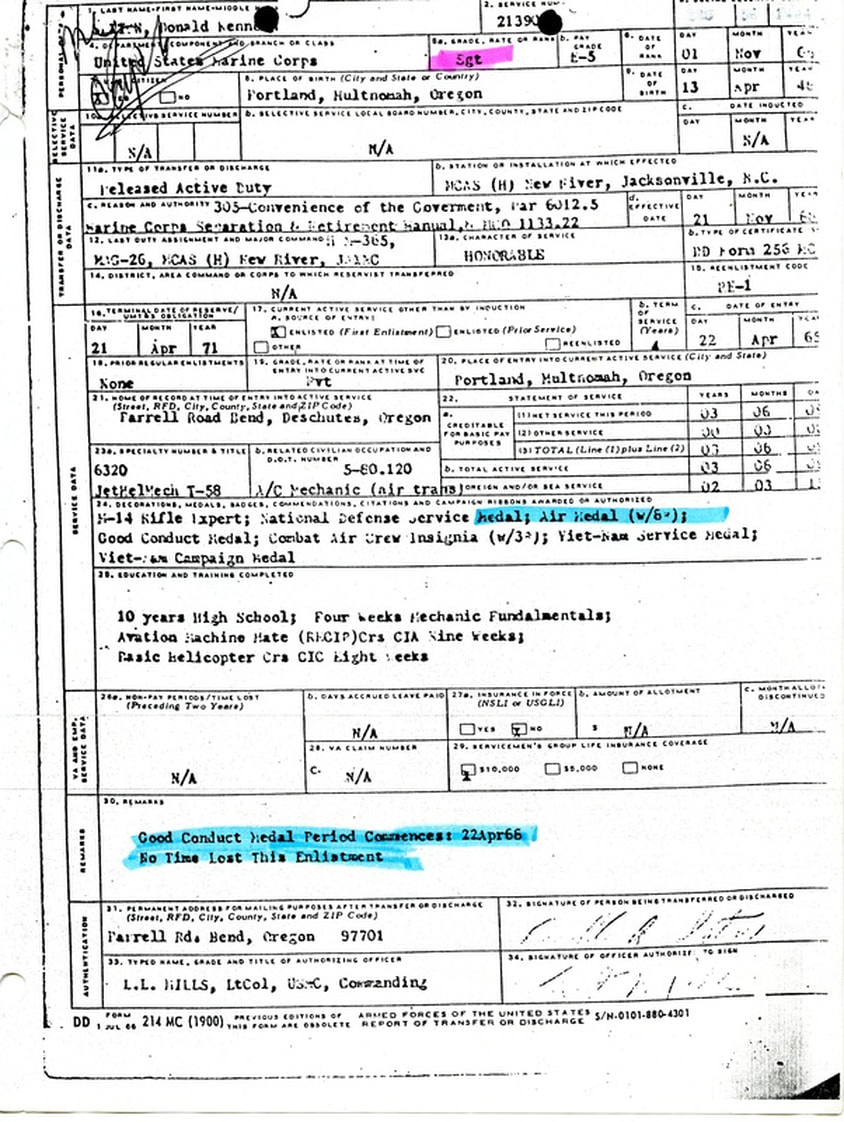 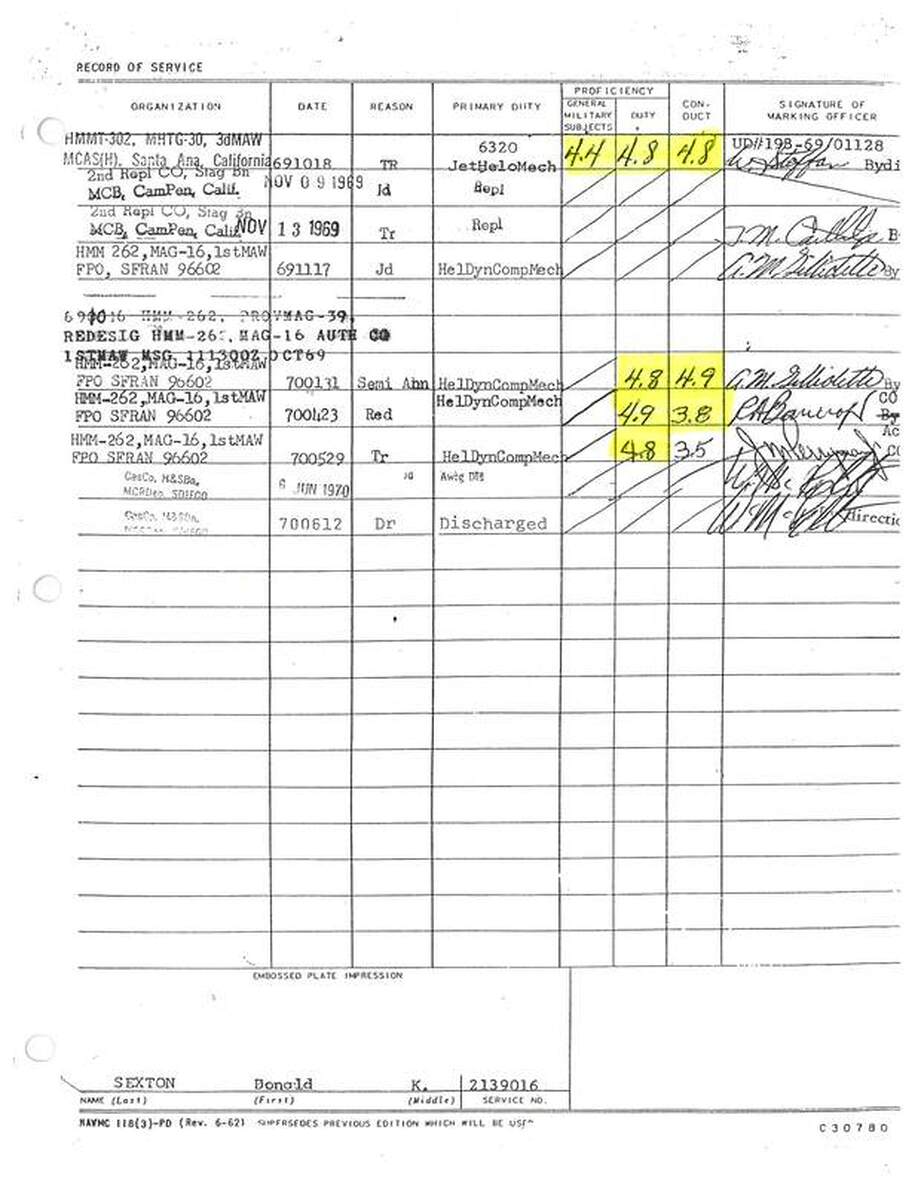 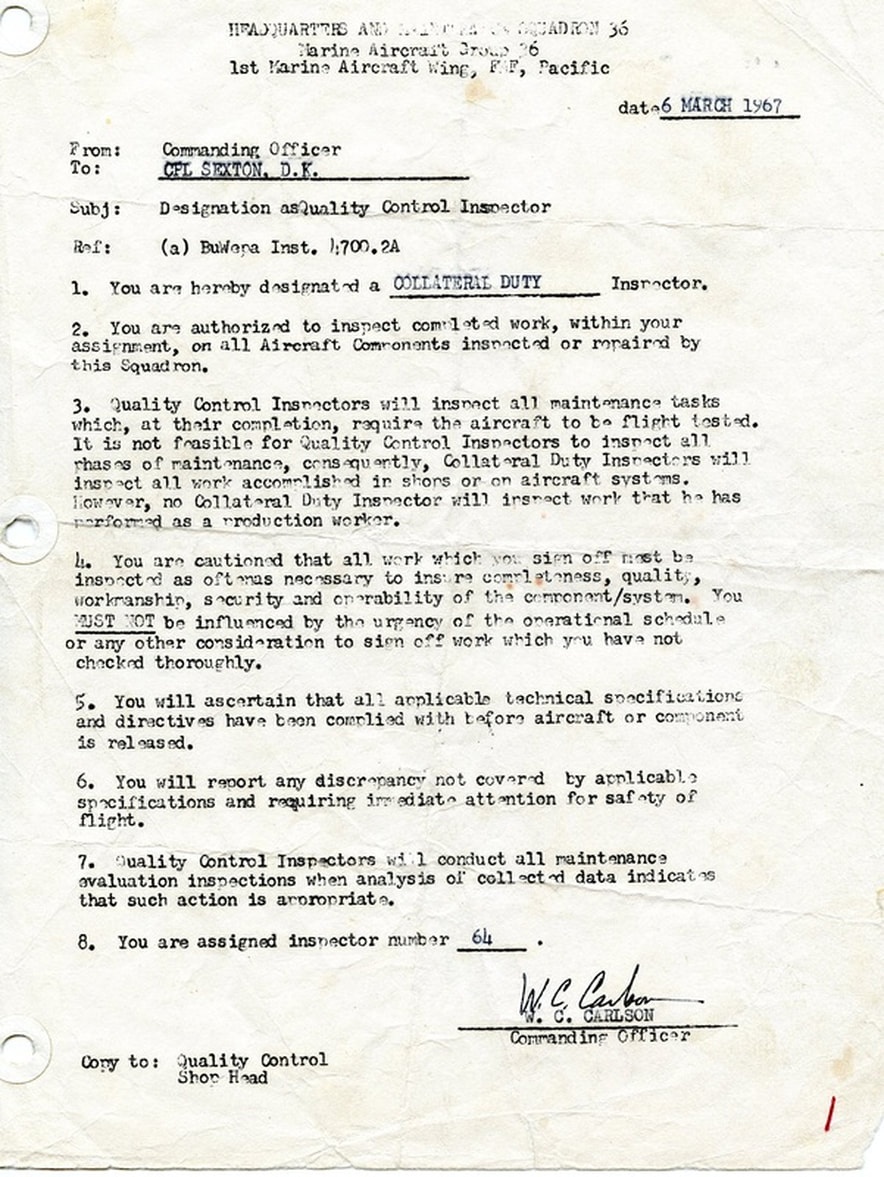 I have officially requested this full court transcript seven times, as several other officers testimony describes not only many missing medals, but the changes in my behavior caused by PTSD symptoms. Clearly a government conspiracy to deny my lawful entitlement for PTSD disability. Oregon Senator Jeff Merkley, has requested missing documents my VA hearing August 16,2021 which would profoundly help get lawfull entitlements earned. Military records did not send any of the records I specifically requested totally unlawful. 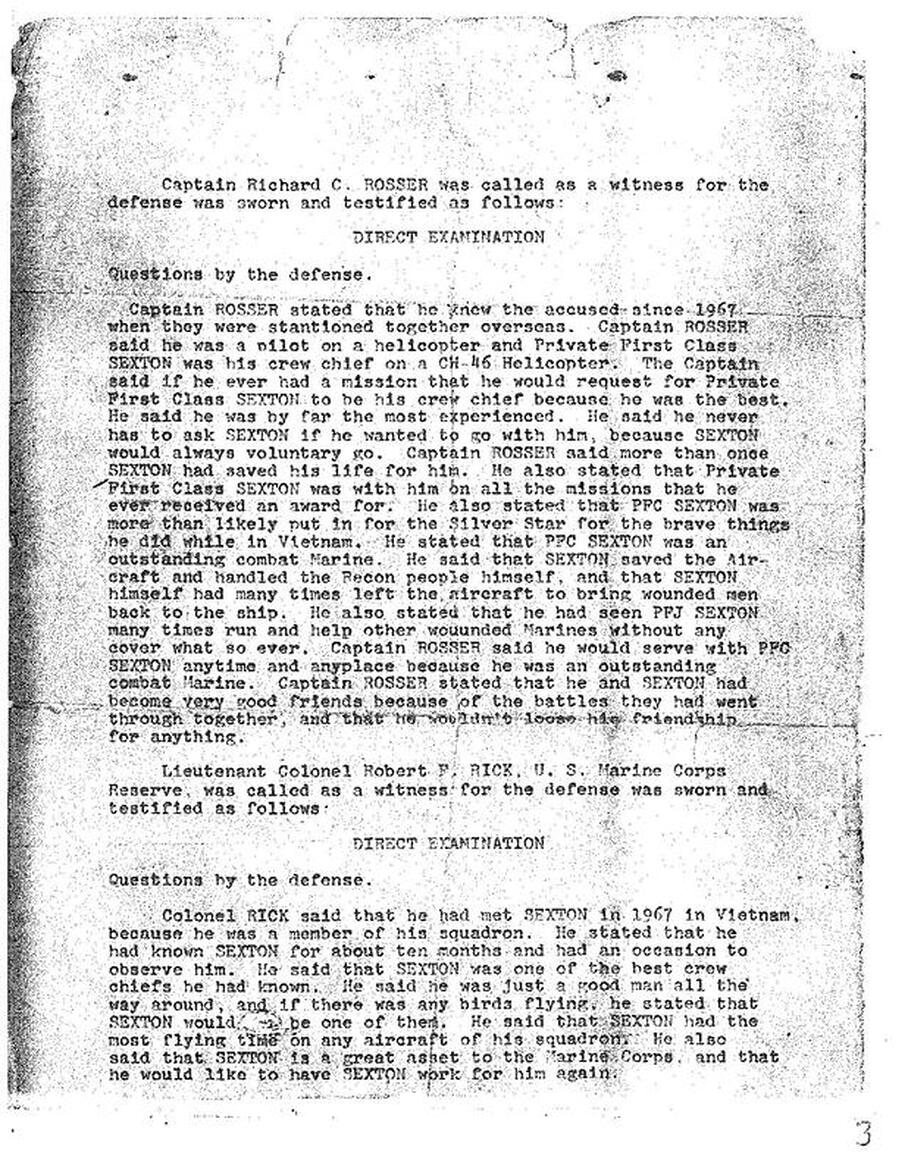 Taken from HMM-262 Squadron year book, I know I was awarded the Distinguished Flying Cross in HMM-164. Government will not give me all of my military documented awards. 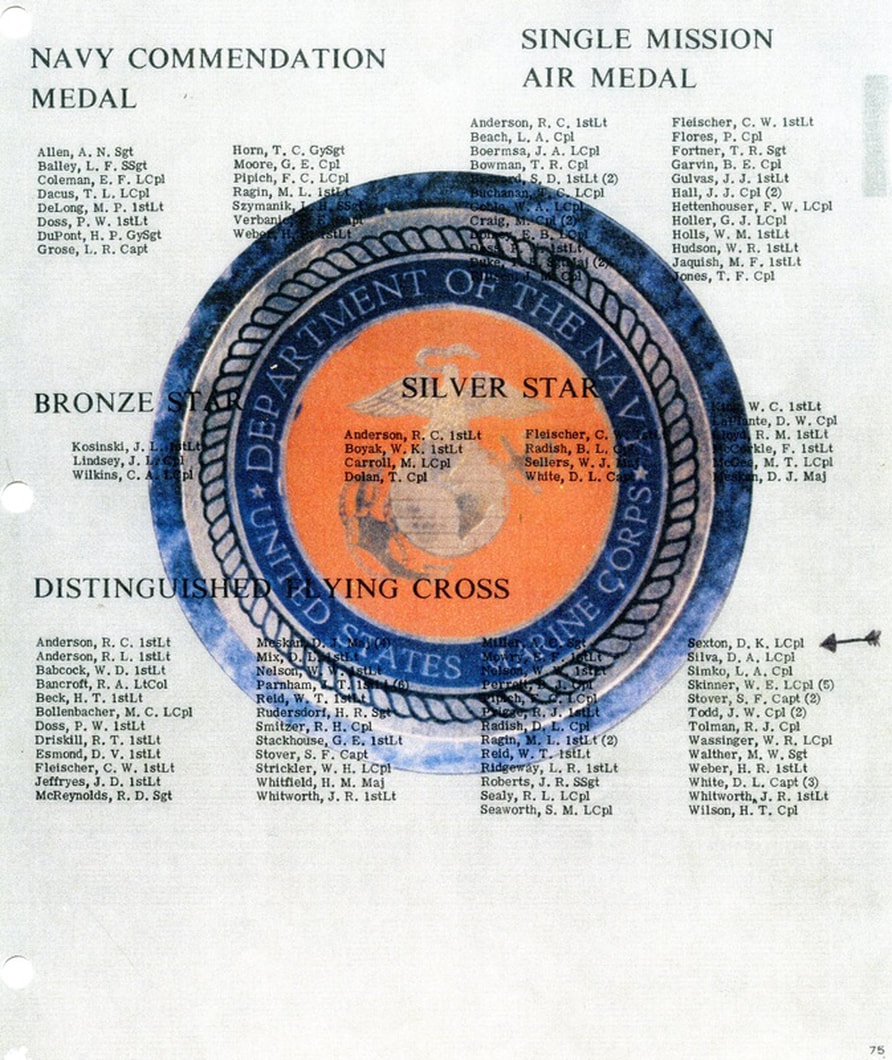 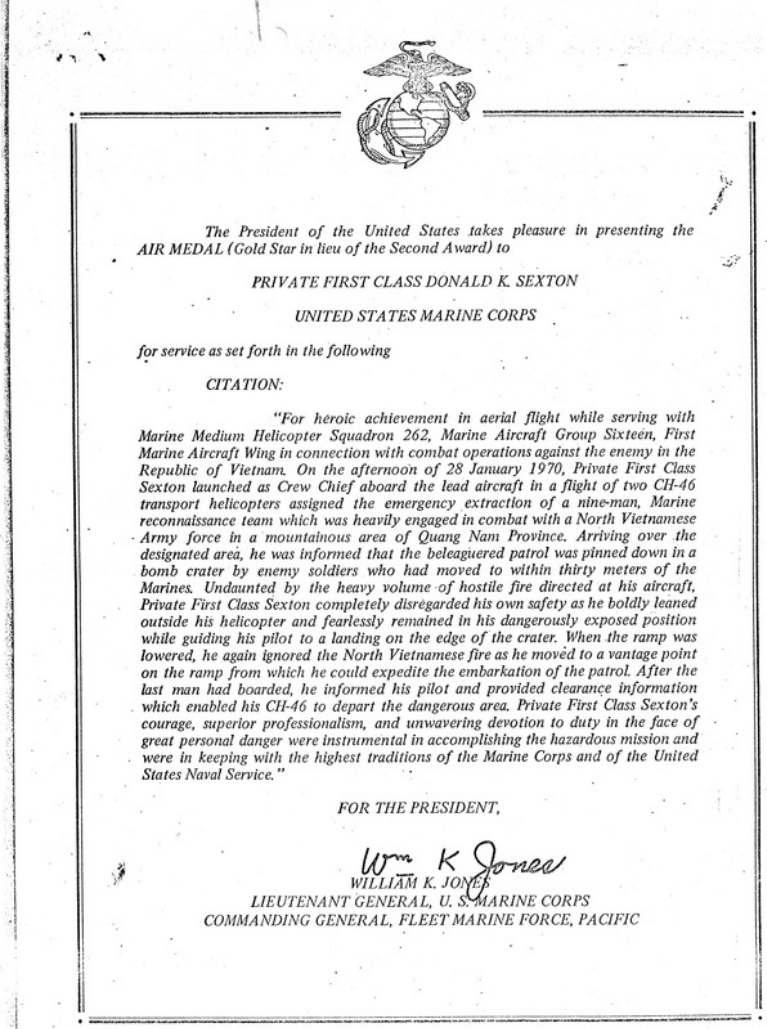 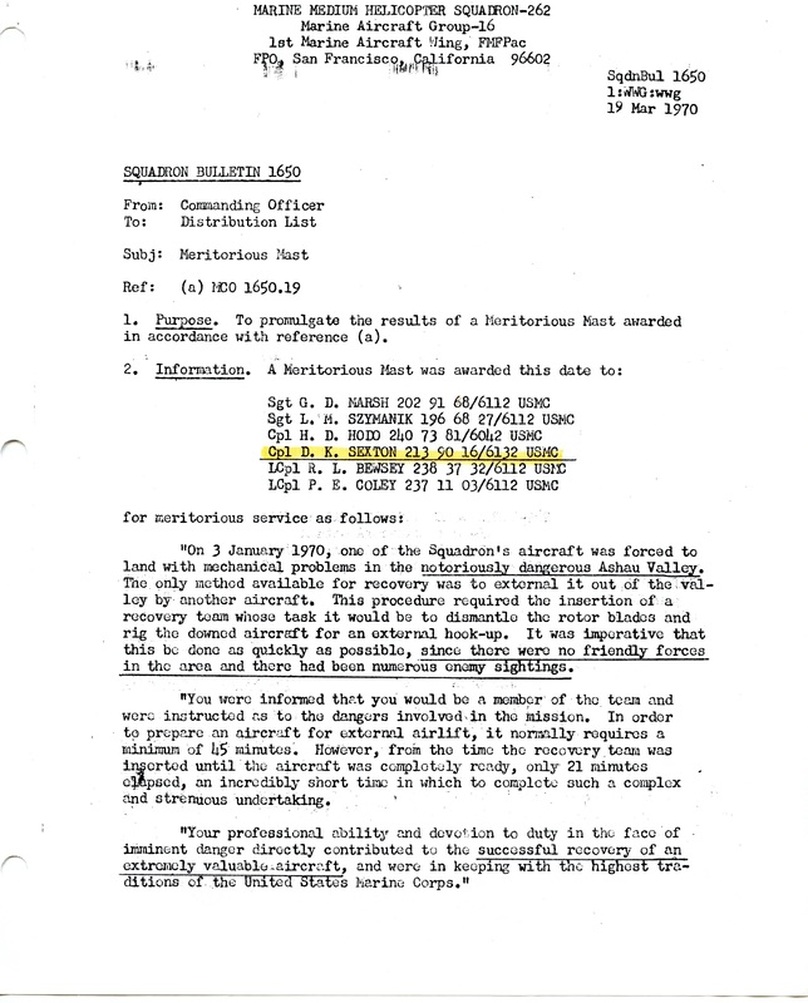 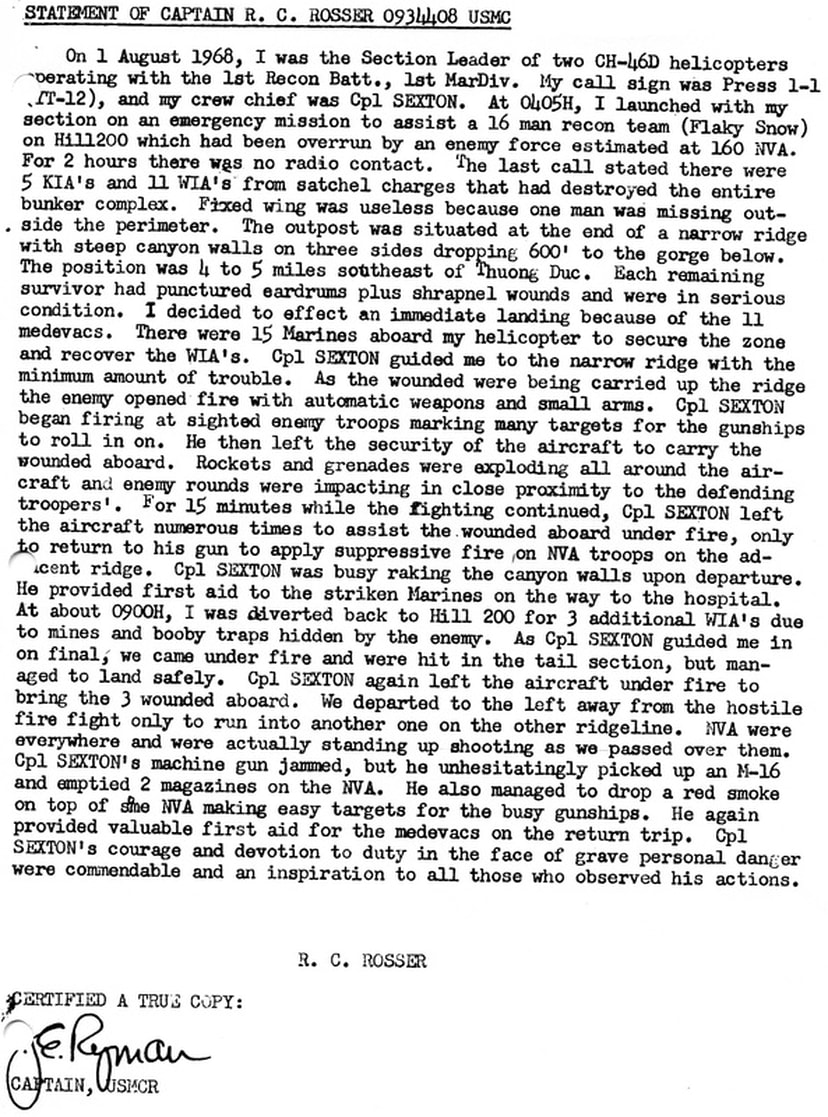 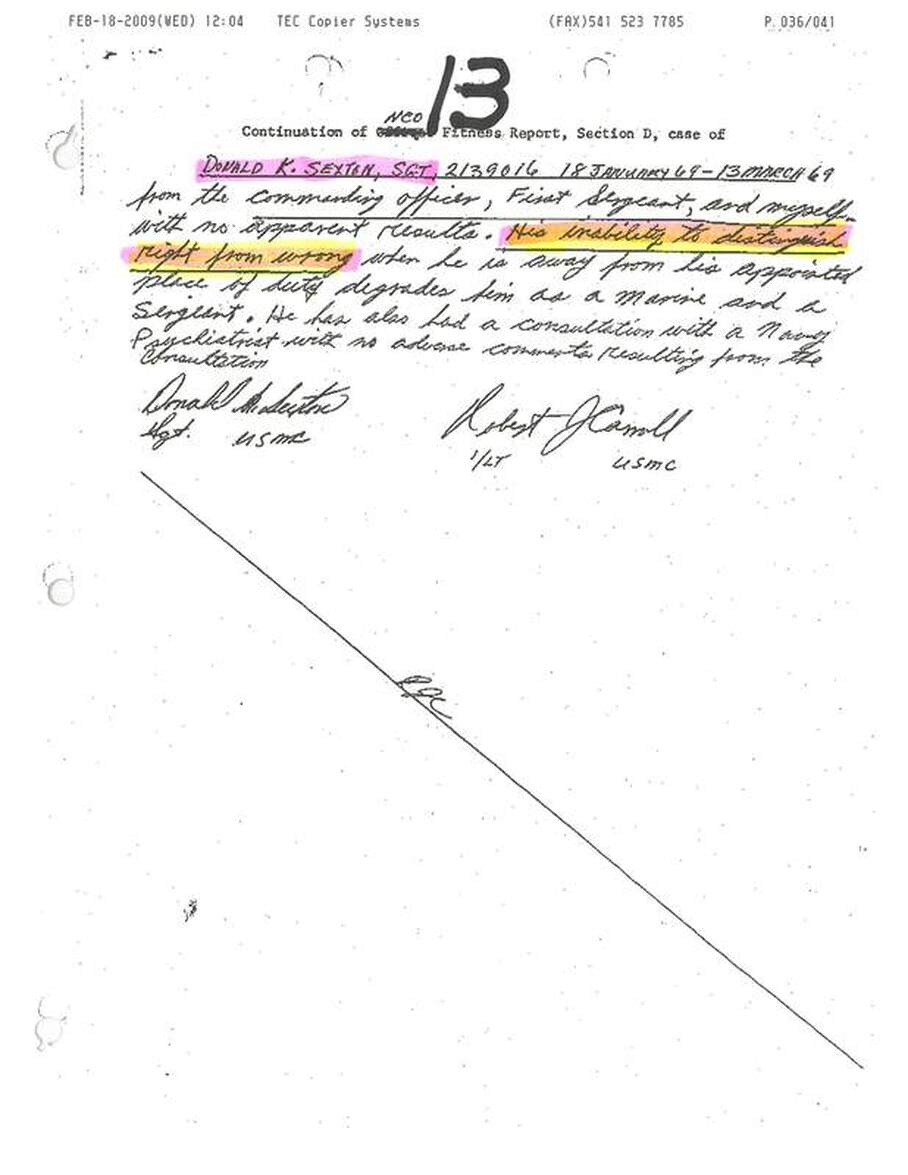 I was only in one fight, authorized by two Marine officers. The Marine corps karate instructor, and he was medevaced out with severe injuries. The two officers were in big trouble, and Colonel Bancroft asked me to accept an honorable discharge to cover up the situation. The Colonel also recognized too much combat had seriously affected my behavior and ordered the statements below be recorded so I could get help. The entire Marble Mountain Marine air base, and the pentagon was talking about this unbelievable event.

You think maybe I was getting massive amounts of adrenaline and cortisol when scared ?
​This was noted by VA psychiatrist in June 29, 1988 PTSD C & P examination. 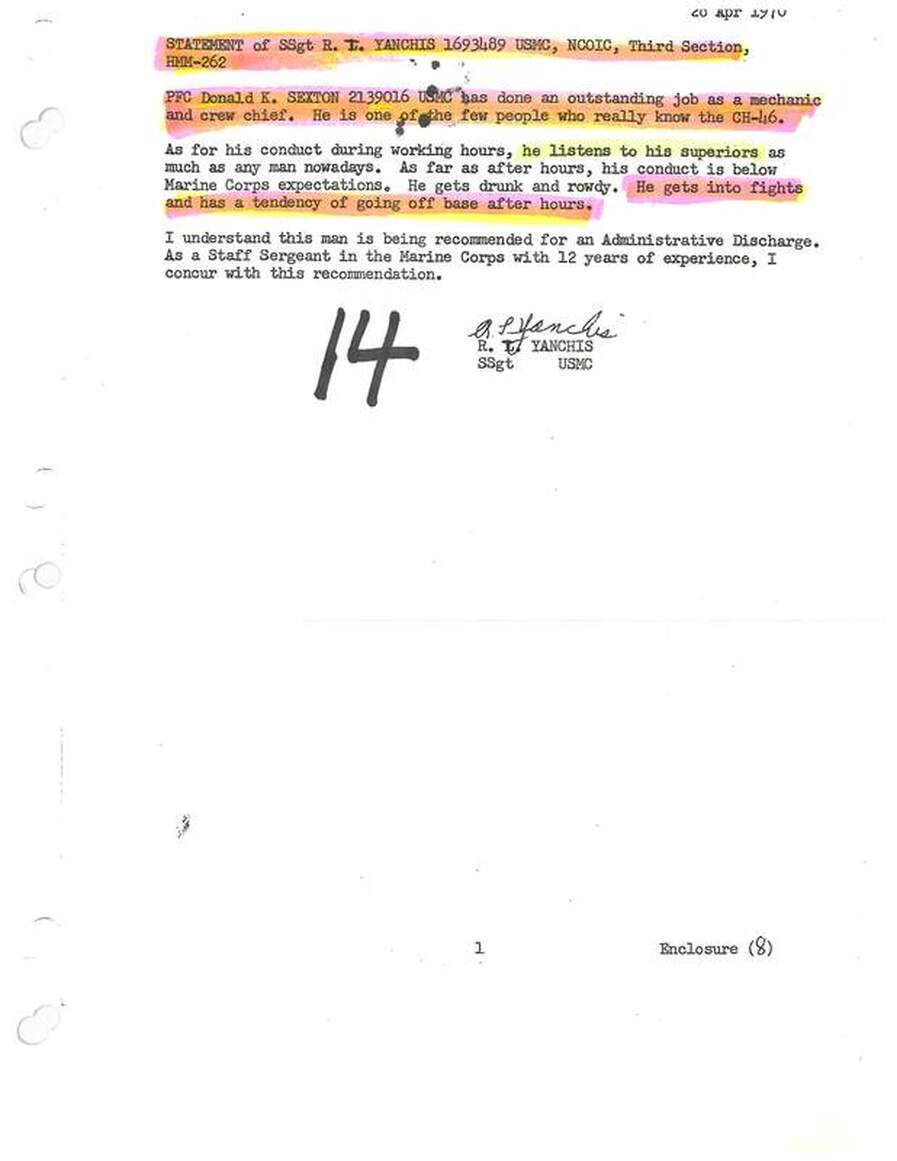 This officer statement was 100% correct. In 1992 VA compensation and pension examination diagnoses me with trauma related amnesia. The trauma I experienced was so painful that many memories were blocked from my conscious mind, and caused my hands and feet to bleed severely for 20 years, during and after my USMC service. s/sgt. Yanchis  & First Lt. Mccorkle testified off base constantly in combat zone, Totally Suicidal Behavior. 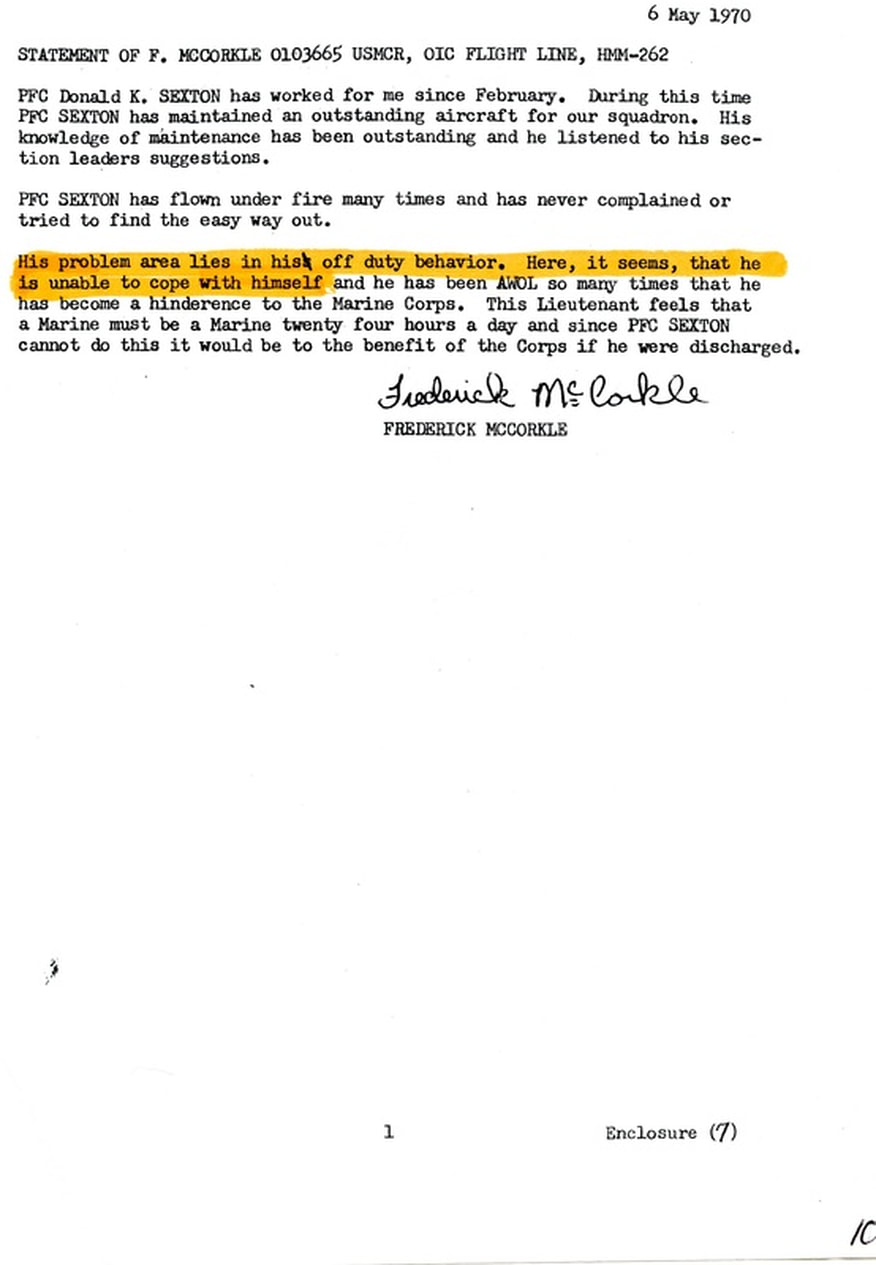 Discharge by reason of unfitness is Unquestionably PTSD symptoms as documented 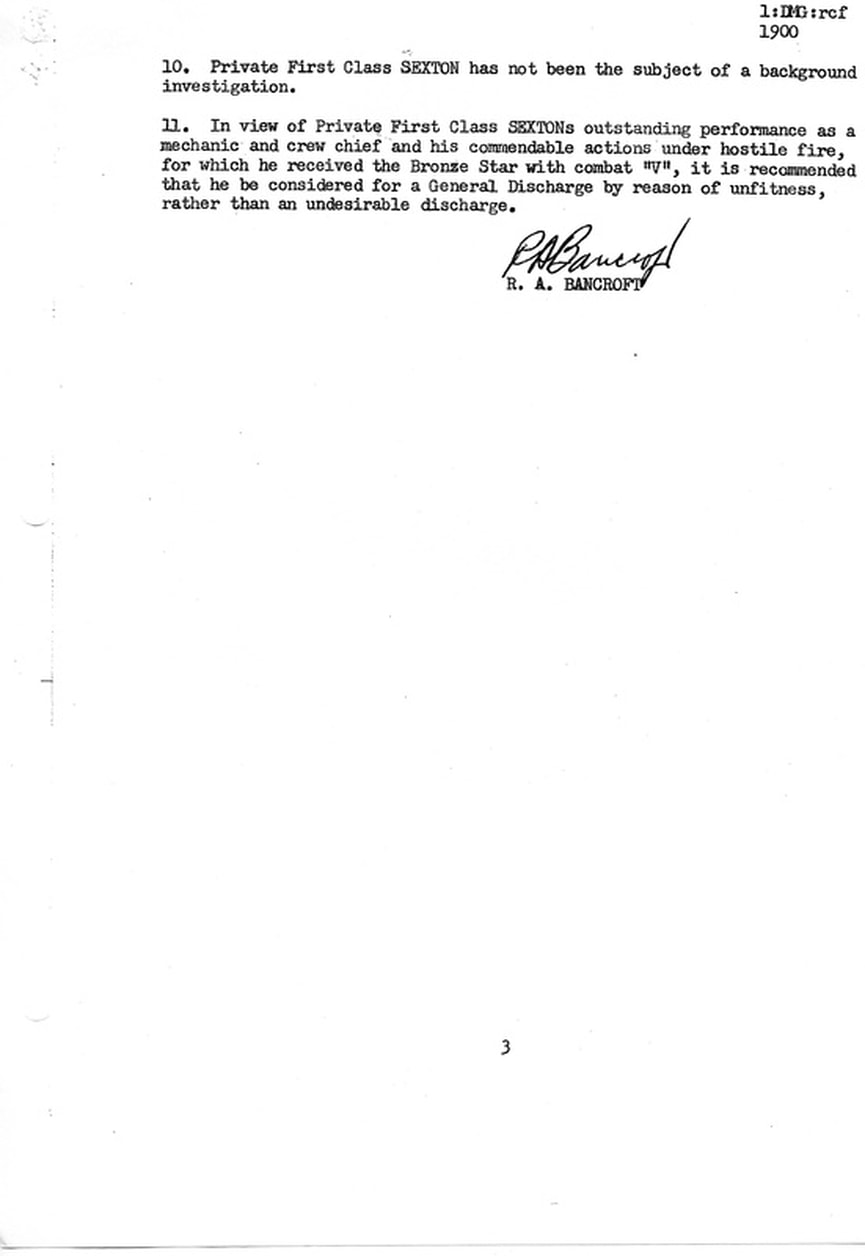 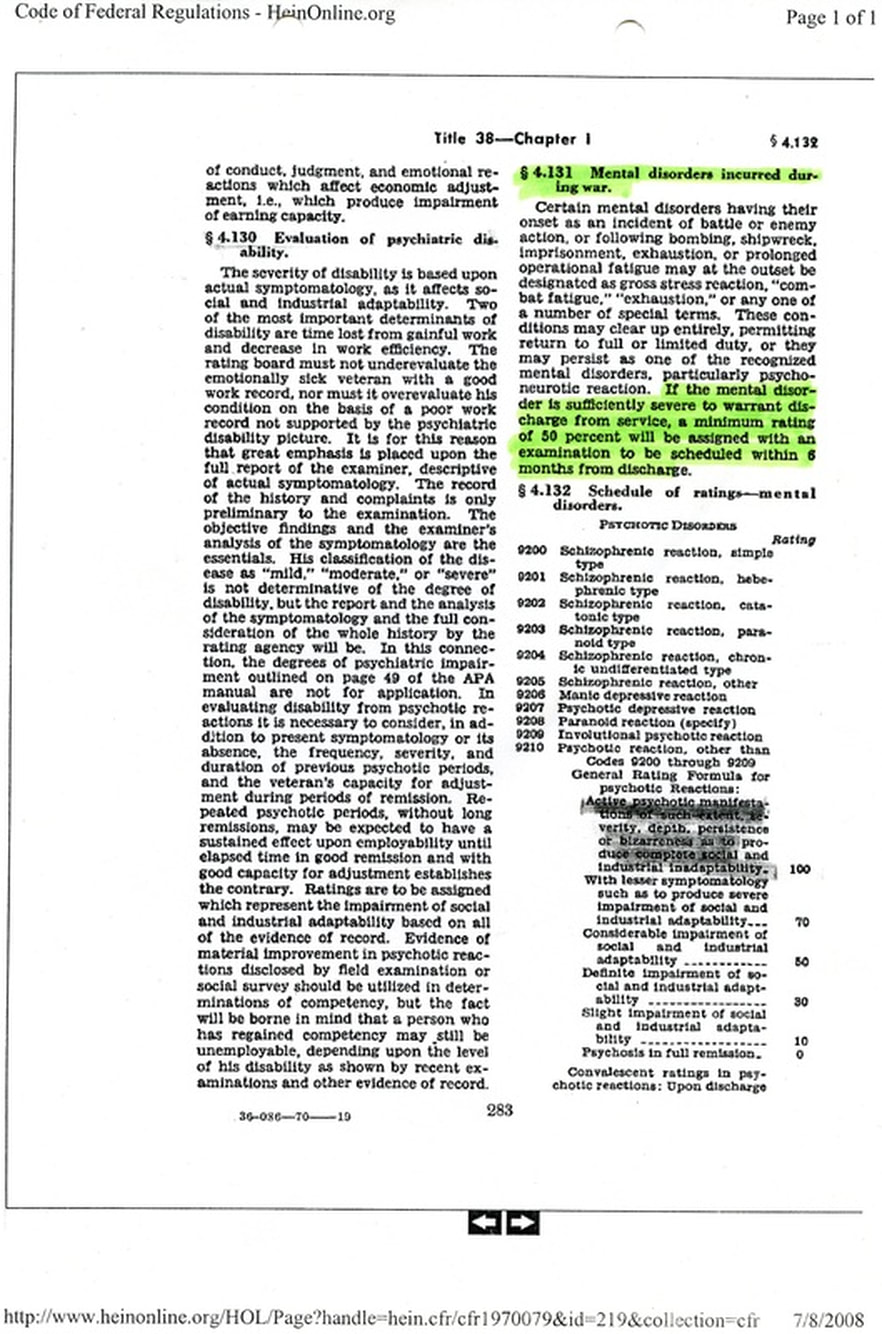 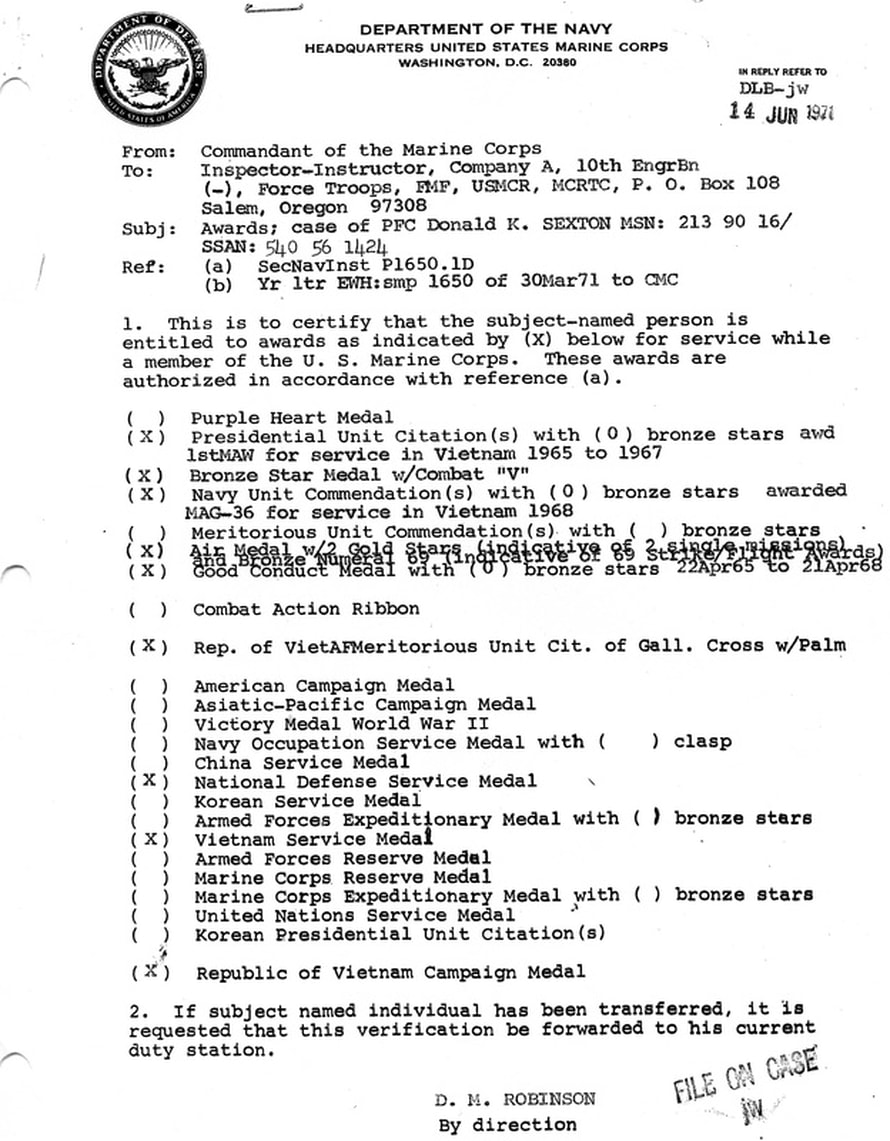 Documentation below describes why I have no idea how many combat medals are missing
I was awarded my first air medal in may of 1967, how many more is unknown. I was a Crew Chief for several months in HMM-165. The document below documents 44 air medals earned in HMM-164, this does not add up correctly. 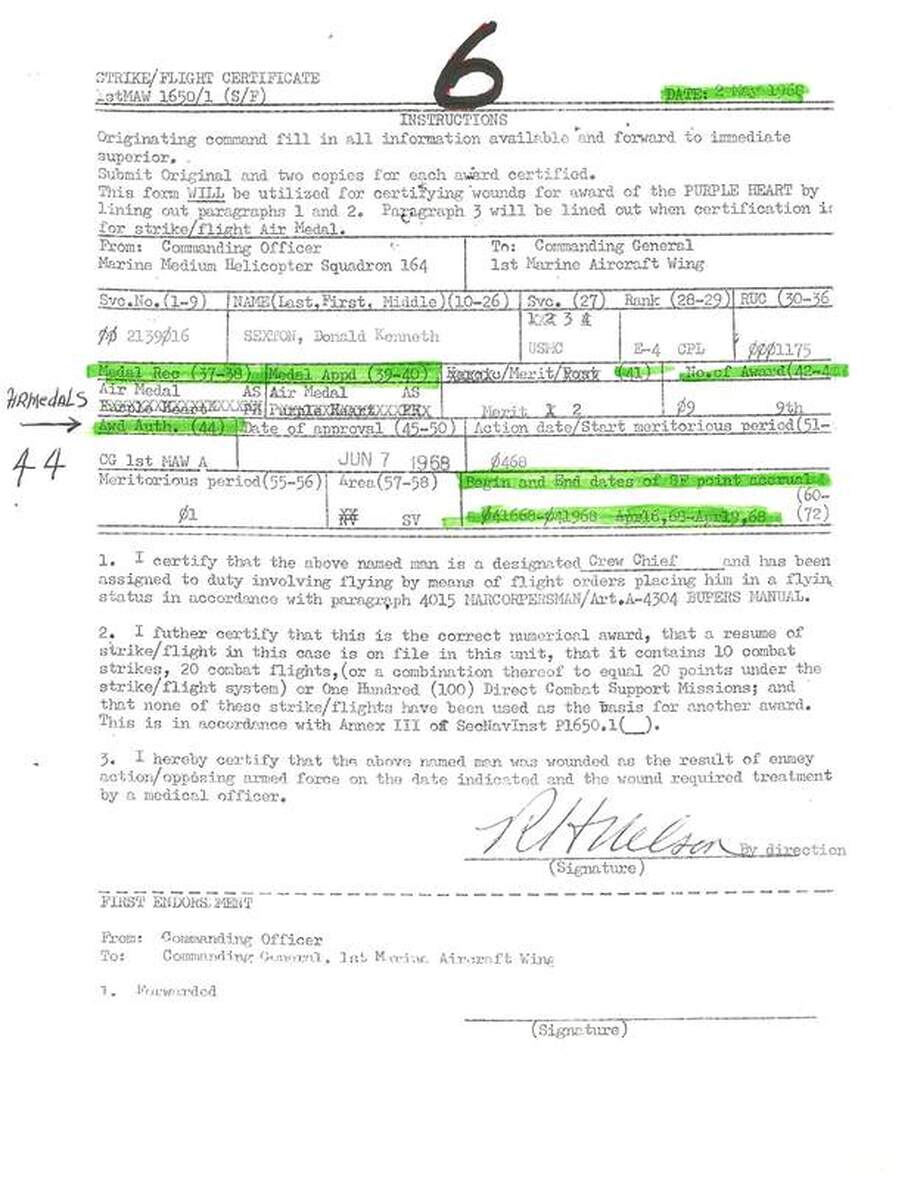 Both of my military discharge DD-214 records only records 8 Air Medals awarded, is this gross negligence or deliberate ?  Every president for decades has awarded veterans the Congressional Medal of Honor, or other very high military combat awards decades later. 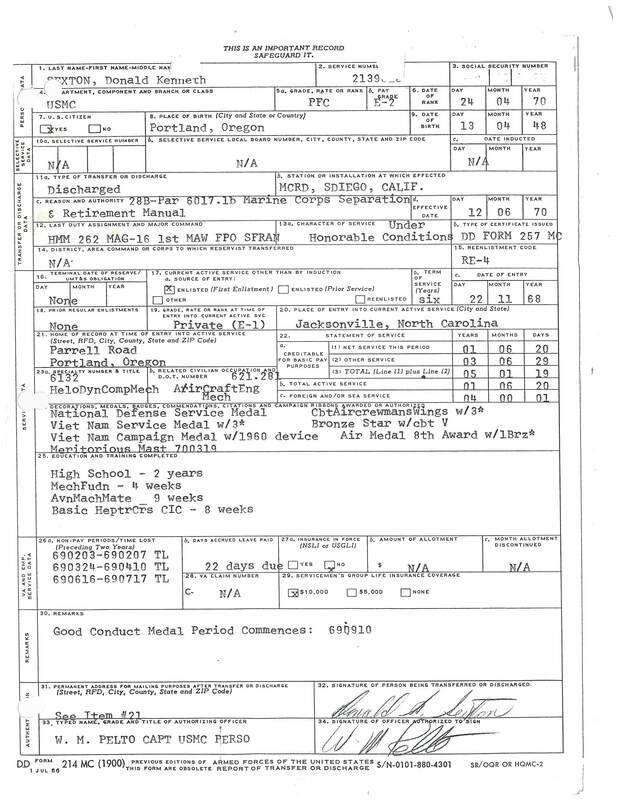 Start of StatCounter Code for Weebly -->